Posted on January 2, 2013 by thedvrfiles

Happy New Year bitches! I know it’s been AGES since we’ve talked. I have been super busy being popular over the holiday season and now that it’s over I FINALLY have time for you again! PHEW.

I was too busy eating Harrison’s Roast Beef to write the last couple of weeks.

First things first. 2013 is going to be the BEST YEAR IN THE HISTORY OF THE UNIVERSE. Why, you ask? Are they remaking Bride of Boogedy? Will Jo from The Facts of Life compete on Survivor? Will LeAnn Rimes and Brandi Glanville become lesbians together?

Hopefully yes to all three. But the one guarantee for 2013 that makes it the best year ever is that the world’s most narcissistic baby will be born! That’s right, I’m talking about the spawn of Kanye West and Kim Kardashian! 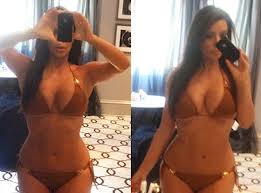 Such a modest, selfless woman. I am sure she will always put her child first.

The Kardashian family is the gift that keeps on giving, and I’m not talking STDs, though I am sure they do that too. After Kim’s pregnancy was announced (via concert by Kanye, of course!), her ever klassy brother Rob declared that he was going to wait for marriage to knock a girl up. What old-fashioned values, especially coming from a gentleman who declared (or not?) that his girlfriend is a regular old whore.