It’s no secret how I feel about Girls. While I am backed up on my DVR and have yet to see last week’s season premiere, I have been begrudgingly following them in the news. First, the show won a Golden Globe for Best Television Series – Comedy or Musical and Lena Dunham picked up the statue for best comic/musical actress (beating out f—ing Julia Louis-Dreyfus and Tina Fey, among others!!!). 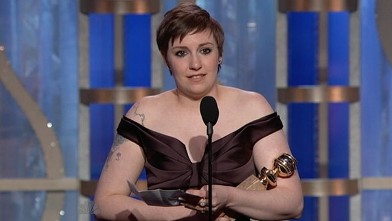 Second, Dunham went on Howard Stern this past Wednesday where she defended her appearance by claiming that “I’m not super thin, but I’m thin, for like, Detroit.” Face palm. I get what she’s trying to say here but it comes off as completely smug and condescending. Failure. I almost feel bad for her in the way she constantly puts her foot in her mouth (anyone remember the tweets she sent to B.J. Novak and Mindy Kaling about dressing up as Canadian serial killers and one of their victims?) but then I am reminder she got a $3.5 million advance to write a book so, nope, no sympathy for her!

And then the final Girls news of the week, for now, is Allison’s Williams’ interview with Company magazine where she makes zero sense:

There were moments reading the script that I thought, ‘WOW, okay! It’s the most private thing anyone can do, but being an actress can make you feel vulnerable.

Williams then goes onto to make a prediction that we as human beings of a certain age have to do everything to do disprove: she proclaims that Girls is “like a digital time capsule – people will watch it in 20 years time, and it will sum up a certain generation.”