SERIOUSLY, Sofia. I like you.  But you’re making it hard.

See, the other night you went to the Emmys where the show you star in, Modern Family, which I happen to ADORE, won a bunch of rewards. And right before it captured Outstanding Comedy Series, you suffered a major tragedy. Your dress ripped. Que lastima! 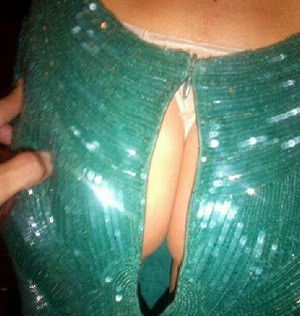 Women get Jon Hamm’s ding dong, men get this!

People may be starving in Africa, troops may be fighting in Iraq, but let’s put this all in perspective. Your dress ripped in fronts of millions of viewers. WAY worse.

You explained to People.com that she “almost had a heart attack.” Well, then! Thank God you tweeted the photo that nearly caused you such an ailment to your 3 million followers on Twitter.

You might have died, but men around the world thanked you. So let’s look at the positive in this travesty.