Today is the first Sunday of Lent and I skipped Mass. Oops!

But in case anyone doubts my dedication to the cause, what I won’t skip is announcing the Hot Catholic of Lent: Day 5! And I think this is probably my least controversial choice of all! 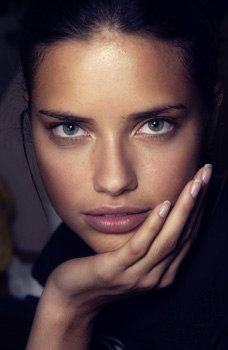 I know all you pervs wanted me to post a super sexy picture of Miss Lima, but it’s Lent! We have to at least TRY to be pious.

Adriana Lima was born in Brazil and moved to New York in 1999 three years after coming in second place in the 1996 Ford Supermodels of the World contest. No, I did not come in first place. Canadian Leanne Spencer did, and she’s hard to find via google image search even when you type in “Leanne Spencer model.” But I did find her linkedin profile! Beautiful models, they’re just like us!

A devout Catholic, Lima revealed to GQ in 2006 she was still a virgin. And I thought I was a late bloomer. Beautiful models, they’re just like us!

Lima went on to marry NBA player Marko Jaric on Valentine’s Day 2009. She presumably lost her virginity that very night because she gave birth to daughter Valentina almost exactly nine months later to the day, on November 15, 2009 (hmmm, was there a little pre-marital hanky panky going on?).  Their second daughter was born on September 12, 2012. Unfortunately, or fortunately for all of you pervs, Lima and Jaric announced their separation in 2014 and finalized their divorce in 2016. What that means is that Adriana Lima is now single.

So congratulations Adriana Lima for being the Hot Catholic of Lent: Day 5!

This entry was posted in Hot Catholic of Lent, Uncategorized and tagged Adriana Lima, Victoria's Secret. Bookmark the permalink.