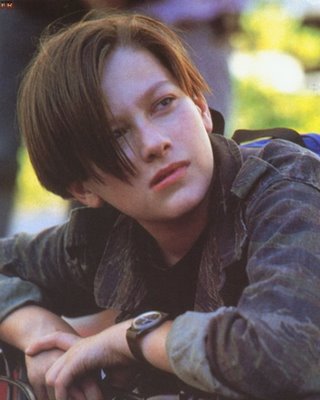 Besides Christian Slater, there was NO ONE I loved more than Eddie Furlong in the early ’90s. My uncle worked for Paramount Pictures at the time, and Sir Furlong was following up Terminator with the critically acclaimed Pet Sematary Two, which was a Paramount movie. I made my uncle get me his autograph. “Hey Liz!” He wrote. “See the movie.” There MAY have been an XO also.

I DID see the movie, but I think Stephen King skipped it.

Furlong spent the 1990s being awesome and handsome and artsy, starring in movies including Before and After, Pecker, and American History X (a movie I LOVED in 1998 but I wonder if I’d cringe now. But that’s a conversation for another day). He even dated his tutor when he was 16–she was 29. Uh, I like them young too but at the very least they need to be able to buy their own booze, or heck just have their driver’s license.

I think he was “Edward” by this point.

In the past ten years or so, Eddie has pretty much disappeared. Occasionally he makes an appearance in the tabloids. But that’s not what this is about–you can go to TMZ if that’s your thing (not that I’m above H’wood gossip. Please. I’m just too lazy.). Today we are celebrating the life of my preteen crush!

This entry was posted in Trip Down Memory Lane and tagged Edward Furlong, Stephen King. Bookmark the permalink.