Who Is The Hottest Guy on Game of Thrones?

Game of Thrones is a great show to watch if you like naked women.

Did you pervs really think I was going to post a picture of a nude lady?

But what about those of us who like hot men? Do they exist in Westeros?

The answer is yes, they do. Now we must ask the important question.

Which one is the hottest?

You can guard ME Jon Snow.

I’ve always thought that love children are the hottest people on Earth because they were created–accidentally–out of an insane need to bone. Jon Snow is proof of this. The bastard child of Ned Stark and some slut (I think–it’s never been confirmed), he serves as part of the Night’s Watch which is a WASTE. I need to infiltrate this community. It’s like the Alaska of Westeros–lots of single, hot, manly men.

Robb is the half brother to Jon Snow and the legitimate child of Ned Stark and his wife Catelyn. He also might be a king, according to some people. He’s a nice, valiant, moral guy, for the most part.

This is a very hipster jpeg for medieval fantasy times.

A dark horse candidate for hottest guy for sure, yet I think Stannis is pretty sexy, even if he communes with a crazy black magic lady. He has ZERO sense of humor, which can be an issue, but I bet he’s great in bed. And he’s another man who might be a king so maybe you’ll get some cool presents.

Is he Mick Jagger’s medieval ancestor?

If you’re into skinny British guys who look like emaciated models, then Theon’s your guy. Warning: he can be KIND of a dick. Just ask the Starks and the community of Winterfell.

I miss you Ned.

Ned Stark is one of the most moral, honest, cool guys around. The only unfortunate thing is he is dead after being beheaded by that prick Joffrey. 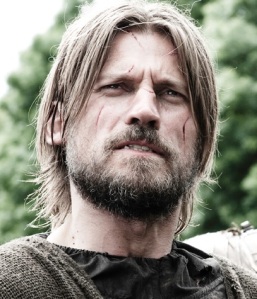 Jaime has some bad habits. Incestuous sex with his sister Cersei, killing people, general all around arrogance. But now that his hand has been chopped off, maybe we will see a softer side of this legendary swordsman dubbed the Kingslayer. I will nurse him back into health, as long as he promises not to murder me.

He has a great collection of belts you can borrow.

Unfortunately, Khal Drogo is another dead guy. Shucks. But he’s SUPER righteous, quite a bit aggressive, and totally manly, so if you like to be a submissive he’d be the perfect choice!

So there we have it–the hot men of Westeros! So is your choice for hottest? Reveal in the comments!