Mama June and Me: A Study of Opposites

Me and Mama June from the Masterpiece Theatre’s production of Here Comes Honey Boo Boo have a lot in common. 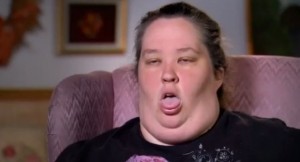 That’s how I feel about walnuts too, Mama June!

This is not about me being judgy judgy. HELL NO! I am the opposite of judgmental. I’m jealous! Mama June is rich and has kids AND grand kids.

I buy generic tomato sauce from the grocery store and I don’t even have a pet fish.

And now Mama June has a husband! Maybe. See, on el cinco de mayo, while I was taking the Lucky Star bus back from Boston, Mama June was exchanging vows were her stud muffin Sugar Bear.

White probably wouldn’t be an appropriate color for them.

Mama has not confirmed if it was just a commitment ceremony or if they were legally wed, but what she DID reveal is that barbecue and cake were served. Yum!

She also offered these words of wisdom, which give me hope:

Never settle for a man who doesn’t treat you right. If a guy doesn’t love everything about you, move on! There are plenty of other fish in the sea.

She obviously has not lived in New York City.