This is a debate for the ages. God called. He said, “Liz, I give you the power to remake one 1980s cartoon with hot babes. What will it be? You have seven days.”

Holy F— God! That’s a tall order! But I’ll rise to the occasion. 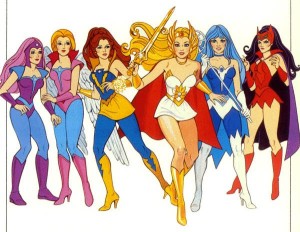 Her friends were hot too.

2) Jem and the Holograms

For those men with punk rock tastes, Jem was your girl. Home girl had pizzazz (but NOT Pizzazz with a capital P–she was in the Misfits) PLUS she could rock out. 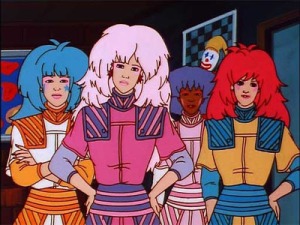 Big hair and bold fashion taste. Why the frown, Jem?

Okay, this is not NEARLY as perverted as it looks. Because if we remade The Flintstone Kids they would now be The Flintstone Teens. And we all know how hot Betty turned out. In fact, she was so petite that she couldn’t even be a Flintstones Vitamin for years–her waist was allegedly too tiny!

Not to throw shade, but the question needs to be asked . . . How did Barney score such a hot chick?

So what’s your vote? God is waiting!!!