Posted on January 4, 2013 by thedvrfiles

Oh to be a youth who loved musical theater in the 1980s. It was a TRIP let me tell you. I grew up in the greatest Valley known to man–the Merrimack, duh, 30 miles North of Boston–but I had this uncle who lived in MANHATTAN and worked in the entertainment industry and did all sorts of cool things like meet famous people and go to Broadway plays. 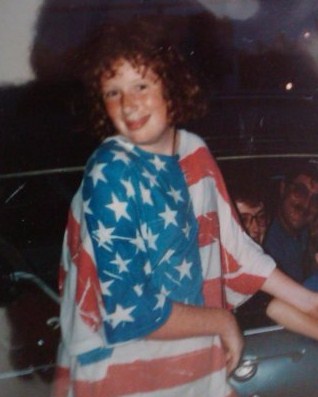 This is the Liz we are dealing with in that era. Of COURSE I liked musicals. With all that flare? OF COURSE I did.

My Uncle John used to send me tape cassettes for my birthday and Christmas of the cast recordings of all my favorite shows like The Music Man, Starlight Express, Cats and The Phantom of the Opera. I would steal my sister’s Fisher-Price Tape Recorder and listen the bejesus out of them. What a “Memory” indeed!

No musical had a greater impact me, however, than Les Miserables, which I of course called Les Miz because I was no French master. I received the Original Broadway Cast Recording for either my 8th, 9th, or 10th birthday (sue me for not remembering. Oops!). As a kid, my favorite songs were “Come To Me” because I loved to cry about people dying and “Master of the House” because hearing swears gave this devout Catholic girl a rush. As I grew up, my tastes evolved and my passion for Les Mis increased . . . I acted out the “Confrontation” between Valjean and Javert, I dreamed of “One Day More,” and I prayed that I would not die in “A Little Fall of Rain” even if it was in the arms of a handsome French soldier.

I finally saw the play in Boston the summer before my freshman year in college and my heart was certainly “full of love” because it was so amazing. I continued to listen to the soundtrack a couple times of year on the dual cassette portion of my 50-disc changer stereo (you are talking to a fancy girl here).

At this point you, my loyal readers, are probably all, while this is a critical insight into the divine person you became, what the hell does this have to do with TV. And to that I reply just you wait . . . I will get there “At the End of the Day” if not sooner.

Okay, it’s going to be sooner. So anyway, I loved the soundtrack, finally saw it live, blah blah blah. But there was a point in high school where they broadcast Les Miserables: The Dream Cast in Concert on PBS to celebrate the 10th anniversary. You better BELIEVE this girl watched the hell out of it!

I thought my life was complete, but then fifteen plus years after THAT they decided to make it into a movie. I was a bit nervous–I can never trust Hollywood after they wasted Bronson Pinchot’s talent in Blame it on the Bellboy–but I decided to give it a shot anyway. So on the day after Christmas I headed to the Loop in Methuen with my aunt, uncle, and cousin Morgan and watched it. And it was awesome. I cried when Fantine died. I got up to pee during “Lovely Ladies” and “Look Down” (two of my least favorite songs after “Castle on a Cloud” even though I do adore Gavroche’s spunk). I even felt a little bad when Javert killed himself. I cried when Valjean died. And through it all, I sang along!

So all you fellow Les Mis geeks–there is still a place for us in the world. And if you want to get pumped, watch the trailer below. Woohoo!

2 Responses to Les Mis Geeks are alive and well!