When Convicts (Who Probably Didn’t Even Do It, Thank GOD!) Are Hot

Posted on December 4, 2012 by thedvrfiles

So . . . anyone watch Dateline on Friday? Anyone else have dirty, dirty thoughts about convicted murderer Ryan Ferguson? 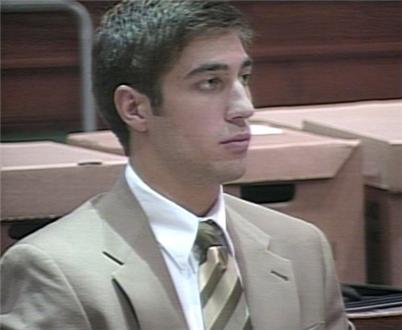 He looks like a college football player not a murderer.

On the episode Under a Killing Moon (of course), Dateline examined a case from eleven years ago where a popular newspaperman from Columbia, Missouri was murdered on Halloween 2001. Years later, a young man named Charles Erickson confessed to the crime and implicated his friend Ferguson. Ferguson was convicted and sentenced to forty years in prison.

Now–after watching the episode I truly believe Ryan Ferguson is innocent and I hope he is released. He is caught up in a nightmare of epic proportions and I truly feel for his family. No snark there.

HOWEVER, I kept watching the episode and had all sorts of dirty thoughts about Ryan. Those big lips, those blue eyes . . . I can understand why ladies correspond with inmates now. I’ll wait for him when he gets out of prison!

Anyway–I guess you could say this is a guilty pleasure? Or would it be false incriminated pleasure? Who the hell knows.

1 Response to When Convicts (Who Probably Didn’t Even Do It, Thank GOD!) Are Hot