What Was Your Favorite R-Rated Movie to Watch While You Were Babysitting?

Babysitting in the early 1990s was AWESOME. Sure, I was a HUGE fan of The Baby-sitters Club and pretended to care all about the kids while I was at their house. But let’s be honest: it was all about the food  . . . and the cable!

My favorite family was the Shays. Sorry for any other kid that I babysat for that is reading this, which is pretty much half the population of North Andover. The Shays’ food selection was decent, but they had HBO AND Cinemax so I had my choice of R-Rated movies to watch on a Saturday night. Check please!

The first movie I watched at their house was New Jack City. Immediately after seeing it I told all my seventh grade classmates that it was my favorite movie ever because there was violence, nudity, and Flavor Flav. 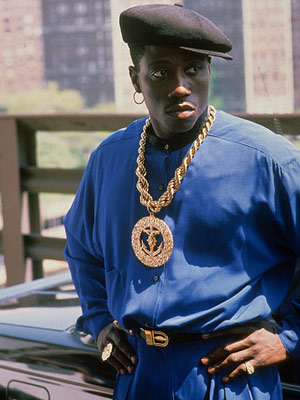 Maybe Wesley Snipes can use some of his money from drug dealing to pay off his taxes?

Kids today don’t know of the struggle we had to go through to watch R-Rated movies. They can download stuff from the Internet. We had to pretend to like kids and babysit in hopes that their parents subscribed to HBO. And this was BEFORE HBO had series like The Sopranos and Sex and the City so it was a rare gem to find such a family, and then you’d never let them go! Otherwise you’d be stuck watching Studs or Empty Nest.

2 Responses to What Was Your Favorite R-Rated Movie to Watch While You Were Babysitting?