Let me just tell you who all the men want to win . . . Christina Hendricks’ boobs! 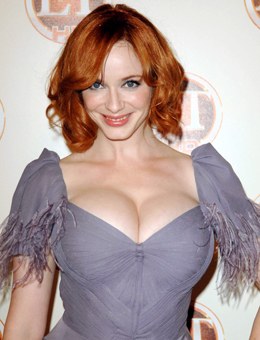 Hey, I gave the girls and gay guys Jon Hamm’s pants. This is the least I could for my male and lesbian readers.

Now down to business, pervs.

I don’t watch any of these shows so my expert opinion might be a little off. But I will tell you that even as an Anglophile I don’t really like that half of the actresses nominated are British. So I’m picking an American. Just saying. And I’ve been a fan of Archie since she starred in East is East back in 1999 and Maggie Smith since she played the Reverend Mother in the best movie of all time Sister Act.

Who I Want to Win: Christina Hendricks

Who Will Win: Who the F— knows. Let’s say Maggie Smith