Jon Hamm and Larry David are Filming in my Hometown!

Why, you ask. Did Kids Incorporated announce a reunion show? Did LeAnn Rimes abandon Twitter and join a convent for reformed fame whores? Did Ryan Reynolds divorce Blake Lively and marry a woman over age 35? Nope! Even better!

Jon Hamm and Larry David are filming a movie in North Andover, my hometown!

Did you hear a thud, because I just fainted! 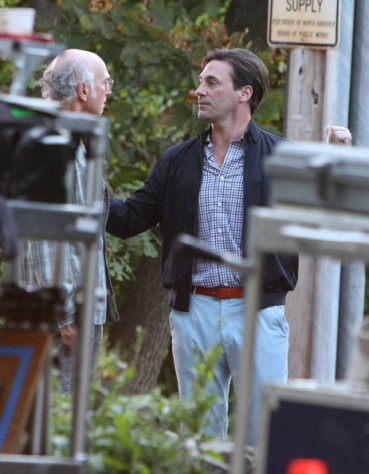 Looks like Jon Hamm is wearing underpants this time. Bummer!

Yes, it’s true! They’re filming an HBO movie called Clear History which also features Michael Keaton, Eva Mendes, and Kate Hudson. My brave intrepid mother even visited the set the other day after stopping by a friend’s house who lives across the street from the mansion where they are filming. She met Larry and said he was very nice! Not a bald asshole at ALL.

This is the most exciting thing to happen to North Andover since they announced there would be a Restaurant Week at such esteemed locations like Captain Pizza, Fuddruckers, and Boston Chowda!