Posted on September 8, 2012 by thedvrfiles

Wow. I’m kind of sad today. Don’t get me wrong–I had FUN. I went for a run, ate an arepa, met friends for lunch, and am getting ready to go to a party because I’m REALLY in demand. But–I can’t help but thinking what COULD have been. See, I should be celebrating my twentieth anniversary to Luke Perry this weekend! 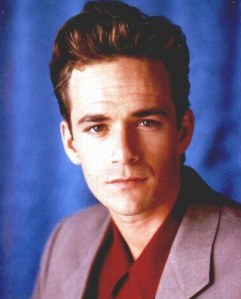 “Liz, is it too late for you to lose your virginity to me at prom?”

See, twenty years ago I was a huge fan of the most important show of all time Beverly Hills, 90210. I can even tell you which episode was the first one I ever watched: the one where Brandon lost his virginity to his girlfriend from Minnesota, and the song “Hippychick” by Soho played in the background, and I blame Darren Star for me thinking that “How Soon is Now?” by The Smiths was a cover.

Can you f—ing blame me?

Anyway, I was into Brandon for like a day and then I met Dylan McKay who had sideburns from heaven and a trust fund from a wealthy dad! And he was bad, and I loved him.

I was TOTALLY convinced I was going to marry him even though I was only 13, because that’s how old Jerry Lee Louis’s third wife was so why not me! And then Luke met this chick named Minnie Sharp and she was a normal person and they got married in 1993 and I was DEVASTATED! Thank God for Andrew Shue, who was now on the scene on Melrose Place! But then HE got married in 1994. Boo f—ing hoo!

By the time Luke and Minnie divorced in 2003, I was totally over him anyway.

Just goes to show, when life deals you lemons, just order a beer instead.