I Don’t Ever Want to Get Murdered in Seattle

Let’s be honest, I don’t really want to be murdered ANYWHERE. But, if my life is going to be cut short, I’d prefer it to be in a city like, let’s say New York, because there I would make the cover of the Post and they would be all, “The unconventional brainy beauty liked to jog and eat cupcakes till she was killed in cold blood.”* They would probably solve my murder and even if they didn’t it would end up haunting an NYPD detective for years and then 10 or 20 years down the line he would write a book about it. At the very least I would become the subject of a Law & Order episode.

Do not use this photo if I die prematurely.

But if I got murdered in Seattle, well, forget about it. Look what’s happened to poor Rosie Larsen on The Killing! I’ve watched every episode of this show since it debuted last year. The first season was excellent, edgy, and suspenseful . . . until the very last episode when Holden did something that compromised the case (though I couldn’t tell you WHAT he did because I am slow), mayor candidate Darren Richmond got shot, and Linden chewed gum. And the second season began much the same way. Linden continues not to smile and be a humorless shrew, Holden looks like a teenage skateboarder and Rosie’s killer is still at large. Granted, we’re only on Day 18 of the case (I’m one episode behind, eek!) but can you IMAGINE if your daughter was murdered and meth-head Holden and frowning Linden showed up at your door??? 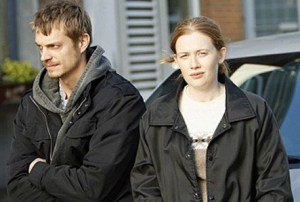 Less effective than the Keystone Cops!

Seattle is a major city, in fact it’s the 15th largest metropolitan area in the country (thank you wikipedia!). There is no way those two are the best the city has to offer. I mean, Rosie is a white girl from a nice part of town! Everyone wants to save the white girls! And–her dad was once a small-time Polish gangster. At the very least his old cronies would straighten out the situation. Instead, we get cops who make Chief Wiggum look like Sherlock Holmes.

I’m going to stick with The Killing for now, but I think this is the worst PR stunt in Seattle’s history. Maybe we can send Steven Seagal: Lawman to infiltrate the Seattle PD? A girl can hope.

*Everyone under 40 is considered a beauty in the Post, whether you be a prostitute (“faded beauty”), a lesbian (“athletic beauty” or “sapphic beauty”), or overweight (“big bold beauty”). I wear glasses and my teeth are a bit overcrowded so hence the “unconventional brainy” tag.