Hola amigos. It’s been a few months since I’ve written. No, I have not hibernated. Yes, I am still watching TV. I’ve also been playing a LOT of Candy Crush, and that sugar rush has kept me away from a lot of my goals.

She’s sweet enough to give you diabetes!

But lucky for you today is Ash Wednesday, and in addition to having ashes on my head I also have a re-commitment to writing! And yes I know I say that every year! But I mean it this time – I’m going to renew my vows to blogging the way a real housewife renews her wedding vows! That ALWAYS works!

Anyway, along those lines I’m going to revive my popular series (ie my mom read it) from last year’s Lenten season, Hot Catholics of Lent! Every day, or let’s be honest, ALMOST every day, I will feature a hot Catholic of Lent! And who better to begin it than an absolute ICON of the screen, Jack Nicholson! 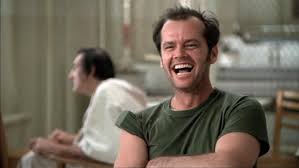 According to wikipedia, Jack was raised Catholic. I don’t know if he’s still practicing, but he definitely has sinned a lot like any good Catholic. He cheated on his long time partner Anjelica Huston (how DARE he) with Rebecca Broussard, an actress who has no credits since 2000. Jack might not be considered hot in the traditional sense anymore, but he was smoking back in the day. I would have flown over the cuckoo’s nest to be with him.

Who will be tomorrow’s Hot Catholic of Lent??? Stay tuned!

This entry was posted in Hot Catholic of Lent, Uncategorized and tagged Jack Nicholson. Bookmark the permalink.