Really, I should stop engaging in this silly habit of a daily Hot Catholic of Lent when there is one grand babe who is truly the Hot Being of Everything which includes objects on all planes of existence in every state of the world that ever was. This particular woman is more important to the creation of the Universe – let alone Catholicism – than the Big Bang or the book of Genesis.

Yes, I am talking about Sophia Loren.

The Italian goddess, now 82, has been acting since 1950. She won the Academy Award for Best Actress in 1962 for her role in the film Two Women, the first actor to win an Oscar for a foreign-language performance.

In spite of her talent and beauty, Sophia’s most important contribution to society is the invention of the side eye, which she famously gave to fellow bombshell Jayne Mansfield in 1957.

No stranger to decolletage herself, Loren was truly impressed by Mansfield’s assets. In a 2014 interview with Entertainment Weekly, she explained her reaction:

Paramount had organized a party for me. All of cinema was there, it was incredible. And then comes in Jayne Mansfield, the last one to come. For me, that was when it got amazing. She came right for my table. She knew everyone was watching. She sat down. And now, she was barely… Listen. Look at the picture. Where are my eyes? I’m staring at her nipples because I am afraid they are about to come onto my plate. In my face you can see the fear. I’m so frightened that everything in her dress is going to blow—BOOM!—and spill all over the table.

I would have been scared too Sophia!

Sophia was married for fifty years to Carlo Ponti, Sr. until his death in 2007. She had two sons with him and now is a grandmother of four. She still acts and still looks great! 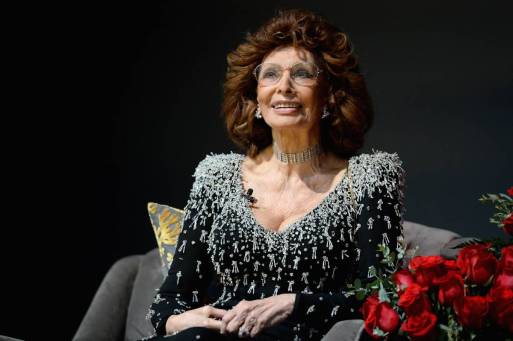 So congratulations, Sophia, for being the Hot Catholic of Lent: Day 10! I know, I know, in truth you are THE Hot Catholic of All 40 Days of Lent, but we have to be fair to the rest of us mere mortals who walk this Earth.

This entry was posted in Hot Catholic of Lent and tagged Jayne Mansfield, Sophia Loren. Bookmark the permalink.