Posted on January 8, 2015 by thedvrfiles

Today I want to show my solidarity and support for the heroes of Charlie Hebdo, a satirical magazine published in France, where twelve people were murdered yesterday, including staff and two French National police officers.

At a rally in Union Square in New York City, courtesy of @NishaChattal via twitter

Why were the twelve people executed in cold blood? Because they printed cartoons like this. 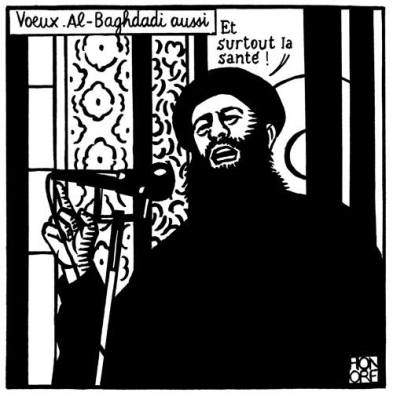 As you can see, they are equal opportunity offenders of all religions. And while as a Catholic, I role my eyes at yet ANOTHER pedophile priest joke, I would much rather live in a society that mocks Catholicism every day in every newspaper than live in a society that condemns and kills those same people for exercising their freedom of speech.

I get to write a silly and fun blog because of people like Stephane Charbonnier, the editor-in-chief of Charlie Hebdo who was one of the twelve killed yesterday. And sure, I may piss off some people (check out the comments of those who do NOT believe Kelly Clarkson and Justin Guarini should have a baby together), but that is a (very small) price which I am willing to pay. After all, freedom of speech does not mean freedom from consequences.

But one consequence should NOT be death. This massacre of Charlie Hebdo is an egregious assault on freedom. As former Onion editor Joe Randazzo explains:

Satire must always accompany any free society. It is an absolute necessity . . . It is, in many ways, the most powerful form of free speech because it is aimed at those in power, or those whose ideas would spread hate. It is the canary in the coalmine, a cultural thermometer, and it always has to push, push, push the boundaries of society to see how much it’s grown.

What happened yesterday in France cannot be overstated. Freedom was attacked. Everyone should be angry. But we cannot be afraid.

This entry was posted in RIP and tagged Charlie Hebdo. Bookmark the permalink.