Why Are We Talking About the Grammys when THIS Happened???

Many evenings I go to bed with the goal of sleeping through the night but then I wake up in a moment of panic and scream out loud, “Why, God? Why have there been almost no Bachelor/Bachelorette weddings in the 18 million seasons that the show has been on? WHYYYYYYY???”

And here’s the kicker–I don’t even WATCH The Bachelor or The Bachelorette, except for the season with Tristan and Ryan. But I yet I care so much, because I believe in love. I’m thoughtful like that.

She should have picked Bob.

NOPE, none of these things. (Well, not sure about Girls, haven’t watched it yet. But we know Lena likes to take off her clothes.)

A f—ing Bachelor got married, which is about as rare as going on a second date with a normal guy on OKCupid!

This time it was Sean Lowe (no relation to Sean or Chad-BOO) who tied the knot with Catherine Guidici, whom he selected to be his sweetheart on the Season 17 finale of The Bachelor which aired in March 2013. 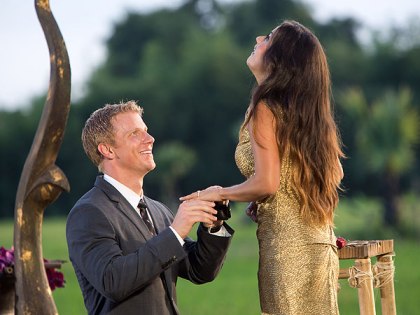 Such a romantic proposal in front of millions and millions of people!

Their wedding aired on ABC last night–how intimate!–and yet NO ONE was talking about it. Well, at least no one on my Facebook feed. Instead, it was all, what’s UP with Pharrell’s ridiculous Smokey Bear hat.

Did he lose a bet or something?

And not only did Sean and Catherine get married, they had sex for the first time! They’ve been very vocal about abstaining from the dirty deed–the dirty sexy deed that is–before marriage. What do you want, a cookie? What’s the point of waiting???

So I guess, congratulations? And sorry no one cared? We were all too busy watching this bitchin’ performance with robots and Stevie Wonder.

This entry was posted in And Not a Single F--- Was Given and tagged Daft Punk, Grammys, Love, Marriage, Pharrell, Stevie Wonder, The Bachelor. Bookmark the permalink.