Hey all-the series finale of Breaking Bad begins in just three hours for us East Coast folk–and no, I will not be posting spoilers on Facebook so you can breathe, Californians–and I am BEYOND stressed. 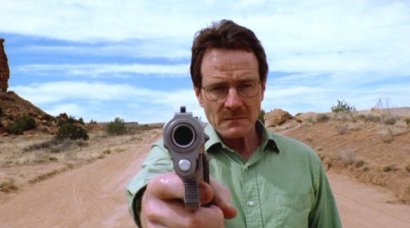 One way to make the time easier, however, is by drinking! So I present to you the Breaking Bad Drinking Game!

Walter says he’s doing it for his family.

What a romantic, covering her eyes so she doesn’t have to see all the people he and his Nazi uncle just killed!

Walter Junior/Flynn complains that no one tells him anything.

Saul works at a Cinnabon in Omaha.

Jesse gets a black eye.

Then by the end of the show, so matter what awful thing happens, we’ll be so drunk that we won’t care!

This entry was posted in Great Television and tagged Breaking Bad. Bookmark the permalink.