Posted on September 4, 2013 by thedvrfiles

It’s been ten days since Miley Cyrus dry humped a teddy bear, a foam finger, and Robin Thicke at the VMAs, but “we just can’t stop” talking about it. Haha see what I did there? 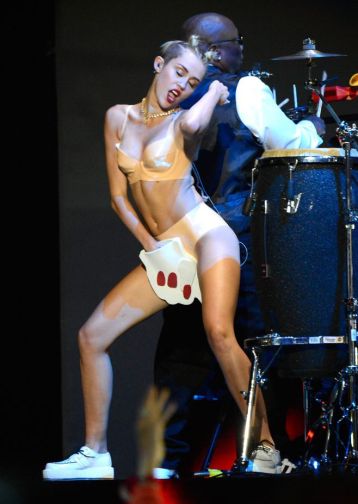 But this is about MILEY, not my amazing wit. Miley’s performance “made history,” according to Miley. Mika Brzezinski of MSNBC’s Morning Joe declared that home girl has confidence issues and an eating disorder. And I’m all, eh, remember when pop stars REALLY pissed people off?

Ladies and gentlemen, I present to you Exhibit A: Sinead O’Connor.

Nothing compares to a perfectly shaped head.

In the early 1990s Miss O’Connor was flying high. She became a worldwide star in 1990 after her cover of Prince’s song “Nothing Compares 2 U” from her breakthrough album I Do Not Want What I Haven’t Got exploded all over the charts. As a fifth grader at Franklin School in North Andover, Massachusetts, I never went seven hours and fifteen days without listening to it. I went to the doctor and guess what he told me? He said girl you better have fun, and maybe try listening to New Kids on the Block. WHATEVS. I preferred the musings of love lost, despite having never kissed a boy besides my little brother Andrew.

But again, this is not about me! Ugh, too bad I’m so interesting!

Flash forward to 1992. Sinead released an album of mostly covers called Am I Not Your Girl? She appeared as the musical guest on Saturday Night Live on October 3 to promote the record. After singing Bob Marley’s “War,” she did this:

Oh no she didn’t! I remember I was babysitting when this was on. I wasn’t paying attention to the song–my head was buried in a book as any dork’s would be–and I remember hearing her say “Fight the real enemy” and wondering why no one was clapping. Those seemed like rallying words! I went home that night and my mom told me what happened. Remember, this was the time before youtube and DVRs. You could not just rewatch what you saw five minutes before unless you had the foresight to pop a VHS tape in the VCR and press record. No television networks replayed the controversial image.

Joe Pesci hosted SNL the following week and addressed the incident in his monologue. Sinead’s career never recovered from the affair. In the 20 plus years since her performance, she’s drifted in and out of public attention mostly due to her wacky personal life: she became a priest, declared herself a lesbian who preferred blokes, and got married four times.

So Miley, please. You aren’t so daring. Your career will be intact in another week or so!

This entry was posted in Look at Me!, Trip Down Memory Lane and tagged Miley Cyrus, Sinead O'Connor, VMAs. Bookmark the permalink.