And the Winner Is . . . Outstanding Guest Actor is a Comedy Series!

Posted on September 3, 2012 by thedvrfiles

Happy Labor Day everyone! I bet you were thinking, Liz deserves a break. She spends all week working and watching tv to bring us such joy in her brilliant blog The DVR Files. And you would be right–I do! However, there is no time for a respite when there are hours worth of programming on my DVR just waiting to be watched! 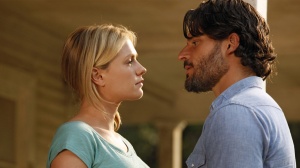 And don’t even get me started on how far behind I am on OnDemand. I don’t even know what’s going on with Sookie and Alcide on True Blood! #LifeIsSoUnfair!

And while I may have taken two days off from writing, I’m back and better than ever with my soothsaying skills so we’re going to continue with the Emmy predictions, okay? Today I am pondering who will win Outstanding Guest Actor in a Comedy Series.

Here are the nominees:

This is actually a REALLY tough one because I watch every single one of these shows except for Nurse Jackie. Well, I don’t always watch SNL but I catch Fallon’s late night show from time to time and I already have a bias towards him because he married an older woman in real life.

First, honestly, though I LOVE Jon Hamm–and I don’t even watch Mad Men!–he’s got to go because he’s the Susan Lucci of primetime Emmys. Let’s make him sweat a few more years before he wins. Plus he’s also nominated for Lead Actor in a Drama Series, so let’s not steal this one from the others, okay? And as much as I adore Will Arnett and the humongous adorable redheaded babies he makes with wife Amy Poehler, home boy is the lead in another show Up All Night and why be greedy. 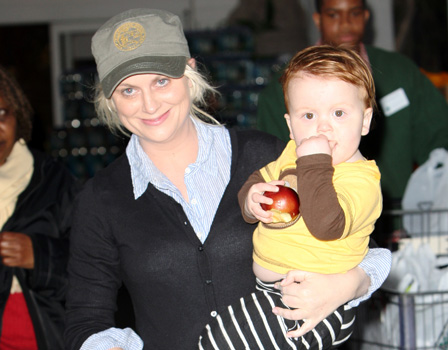 He’s the same size as Mom!

Ditto with Jimmy Fallon, who I worship but the man is already on TV every single week night, what’s an Emmy gonna do for him? And while Greg Kinnear’s career is slightly more quiet these days, he is a victim of my Modern Family backlash even though I love the show!

So now we’re left with two . . . Bobby Cannavale and Alex P. Keaton, I mean Michael J. Fox. As I mentioned, I don’t watch Nurse Jackie but I have been a fan of Bobby for years, ever since I saw him in the movie The Station Agent with Peter Dinklage. He’s not only talented and handsome, he’s also my favorite combination ever–Italian and Cuban! But that’s just superficial and I am really quite deep so let’s just forget I said that, okay? He was also featured on everyone’s favorite prison drama Oz and even read the audiobook version of one of my favorite novels Lush Life. So I would not be upset if he won the Emmy!

You can sell ME a hot dog anytime Mr. Cannavale!

BUT . . . perennial Emmy favorite Michael J. Fox was also nominated in this category, and while he’s won about 802 Emmys over the past 25 years, he was such a great sport playing himself on Curb this year that I just HAVE to bestow the Emmy onto him!

I bought this magazine back in the day!

Who I Want to Win: Michael J. Fox

Who Will Win: Michael J. Fox

2 Responses to And the Winner Is . . . Outstanding Guest Actor is a Comedy Series!