Who will be the next Kristen Stewart and Robert Pattinson to make us not believe in love anymore???

Confession: I am an adult. As an adult, I like adult things like wine, beer, bars, and tapas. I even like a good old-fashioned scandal. There was this REALLY shocking one back in 2005 that I still talk about. See, there was this actor Brad Pitt. He starred in all kinds of great movies like Kalifornia, Too Young To Die?, and Thelma & Louise. 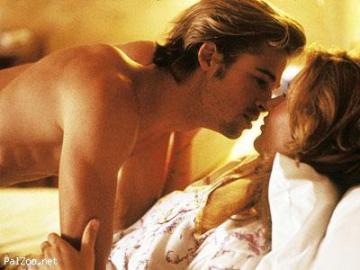 Why yes, you may seduce me.

Brad was a HUGE celebrity, and he was married to this talented actress Jennifer Aniston who had once starred on this awesome tv series called Ferris Bueller and as an extra in Mac and Me. But then he made this movie called Mr. and Mrs. Smith, featuring this up and coming goth girl named Angelina Jolie, who had big lips and a famous pedigree–her dad was Midnight Cowboy Jon Voight. I guess Brad thought his career would go further if he dated her?

To make a short story long, Brad ended up leaving Jen and had like a bazillion kids with Angelina. Jen has since found love with actor and sculpted-eyebrow-lover Justin Theroux, but it took FOREVS!

So as you can see, I love a good scandal. But one that I absolutely cannot get behind is Kristin Stewart and Robert Pattinson. One, because I am over 13, so I don’t CARE about Twilight. Twinkly vampires are super lame. Plus, did anyone really buy them as a couple anyway? They were like the Tom Cruise/Katie Holmes of the tween set. Come on. That said, why mourn for poor Robert? He’s a famous and an (arguably) hot 26-year-old. He could bang as many chicks as he wants! Shouldn’t this be the time to do so? Now he’s free to spread his seed!

It makes me think which other couples are shoved down our face via Us Weekly and E! News that we’re supposed to believe spend the night in the same bed. I don’t watch Glee but unfortunately due to People Magazine’s Star Tracks I know that Cory Monteith and Lea Michele (never trust a girl with two first names!) are supposedly a couple. I just don’t buy it. I wonder what kind of scandal the masterminds behind this relationship will cook up when either one of them wants out? Maybe Lea will wind up with Chris Colfer? Or better yet Jane Lynch??? A girl can wish!