I’m like a kid with ADD who needs to take her Adderall (I wish! Drugs are cool!). I know I was going to give you all the Emmy predictions, that I was going to tell you all about the hottest Olympians of all time. What happened, Liz? Well, as I mentioned yesterday I went to LONDON because I am fancy and an Anglophile. So I got a little busy.

Plus, my list of sexiest Olympians of all time has been seriously challenged as the 2012 games was muy caliente and now I have to revise. However, I will quickly list for you a couple of my loves from games past because then  I have to do that terrible thing known as SHOWERING  for work (Boooo!).

So here we go!

Russian swimmer Sexy Alexey won gold medals in the 50m and 100m freestyle in the 1992 and 1996 Olympics. All I can say is, thank God the Cold War is over, because he is on fire! 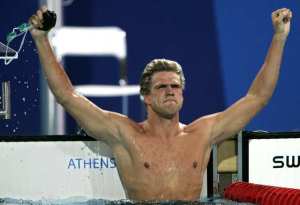 Let’s be honest. Gary is a fox, but in that very early ’90s way, kind of like Aaron from the Real World Season 2.

“Can I borrow a pair of acid-washed jeans, pretty please???”

But his redeeming quality, besides an exquisite jaw and fabulous hair, is his top notch swimming skills. After losing to Sexy Alexey in the 50 and 100m in Hotlanta, Gary vowed “I’ll be back!” and won the gold in the 50m in Sydney in 2000 and again in Athens in 2004, becoming the oldest American swimmer to do so at age 29 since 1924! Wow, it’s scary when 29 is the oldest at anything, besides playing a teenager on Party of Five (I’m talking to YOU Scott Wolf!).

All right, gotta get ready for work!